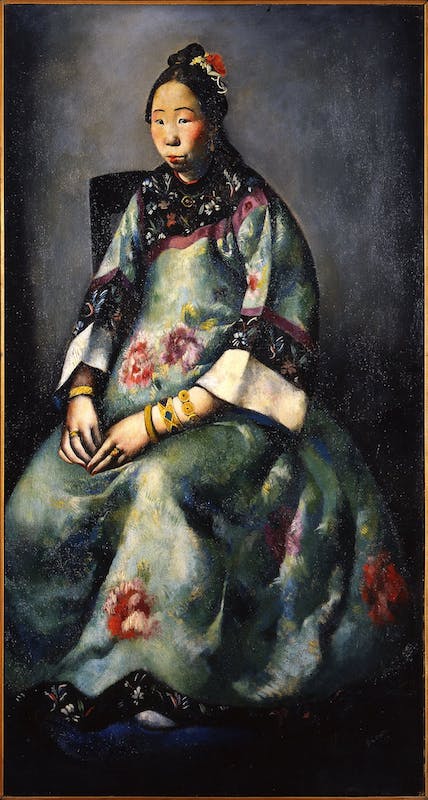 “In only four days […] of incredibly intense work, I managed to produce ‘Liung-Juk’ in its entirety: this work had been rattling me for some time and it is something more than a relaxing break from the anguish of a triptych and its toils– instead, I‘d like to call it a frenetic gift, full of novel-like ambushes, from me to my friends”. This was how, in a letter to his friend Alessandro Pavolini, young Primo Conti described the creative process of one of the works he dedicated to the exotic theme, painted during the realisation of the Crucifixion triptych for the Church of Santa Maria Novella in Florence. The inspiration that gave rise to the work was the magnificent imperial dress worn by the Chinese maid of Primo Conti’s lover, a Dutch woman who had lived in Singapore. The triumphant firework display of colours enhanced by the neutral background is in stark contrast with the woman’s expression, who looks almost cowed, and certainly not princess-like in the least.

Conti built the figure in line with a pyramidal scheme, influenced by the study of the Maestà of the 14th Century, combining it with the sober monumentality of Fattori’s portraits. Several generations of painters in Florence, and not only those following an academic path, paid their tribute to the masters from the 14th to the 16th centuries.

From the Macchiaioli period until the 1920s, the tendency to construct works using volumes, and the studies focused on perspective and space traced a line of continuity from the art of the past to that of modern times. The bold brushstroke used by Conti defines the figure using levels and is reminiscent of the way Cézanne structured his volumes, a popular figure at the time whose works populated the Florentine collections. This solid volumetric scheme is brought to life by powerful blasts of colour and light, evoking the Futurist climate in which Conti had played a leading role as a very young man in the previous decade. The painting would go on to win the 4th edition of the Ussi Award, organised by the Academy of the Arts of Drawing in Florence, thanks to a donation by the painter Stefano Ussi. And as the winning painting, it would then enter the collection of the Modern Art Gallery.