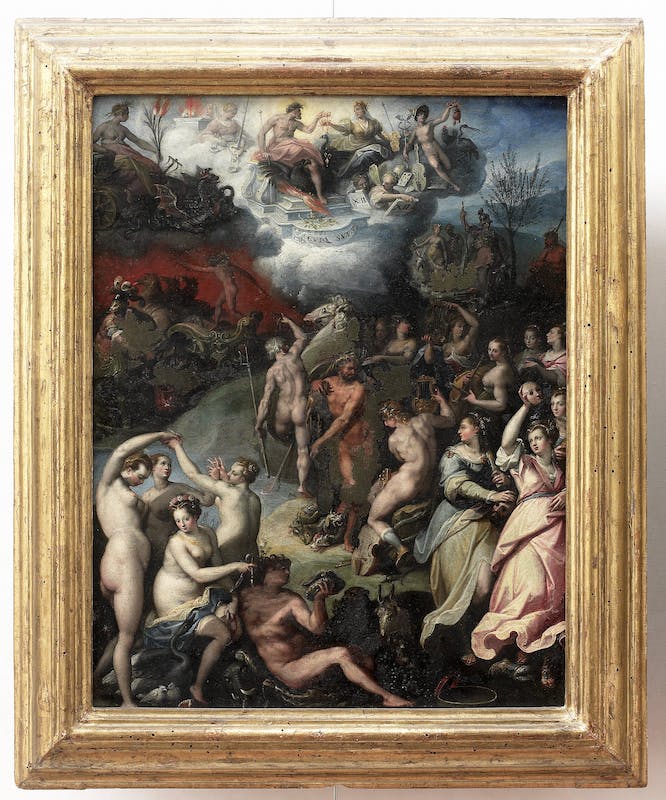 The gods of Olympus with Hercules and the Muses

For a long time, this small painting was believed to depict The Iron Age and to form part of a cycle together with other two works by the same author and of a similar format, respectively portraying The golden age and The silver age.

Instead, recent studies have shown that this small painting is not related to the other two, not only because it is painted on a different medium, copper rather than panel, but above all because the subject had been erroneously identified.

In fact, it depicts the gods of Olympus with Hercules and the Muses. The iconographic theme is inspired by a passage of the Theogony by the Greek poet Hesiod, in which he relates that Jupiter, having dethroned his father Saturn, became the head of the gods. Zucchi depicts him perched high in the sky, delivering to Juno the attributes that identify her as the queen of Olympus. The goddess of Justice, Astrea, and Mercury, messenger and cup-bearer of the gods, figure on the sides of the couple.

At the bottom, as if in a sort of encyclopaedia of mythology, a theme particularly close to the painter’s heart, given his in-depth knowledge of mythography, the other divinities of Olympus flaunt their respective attributes.

The inscription on the steps of the throne, “To each his own”, taken from a passage of Cicero’s De natura deorum, provides the key to interpretation of the painting, which alludes to the fundamental principle on which divine justice is based.

The small work, perhaps destined for the door of a cabinet or for a private study, was probably commissioned to Jacopo Zucchi by Ferdinando I de’ Medici during his cardinalate.

Having studied under Vasari, Zucchi became his main collaborator, participating in the decoration of the Salone dei Cinquecento and the Studiolo of Francesco I in Palazzo Vecchio. In 1572, he settled in Rome, becoming the favourite artist of Ferdinando, who commissioned him to complete many projects, including the task of decorating his villa on the Pincian Hill.