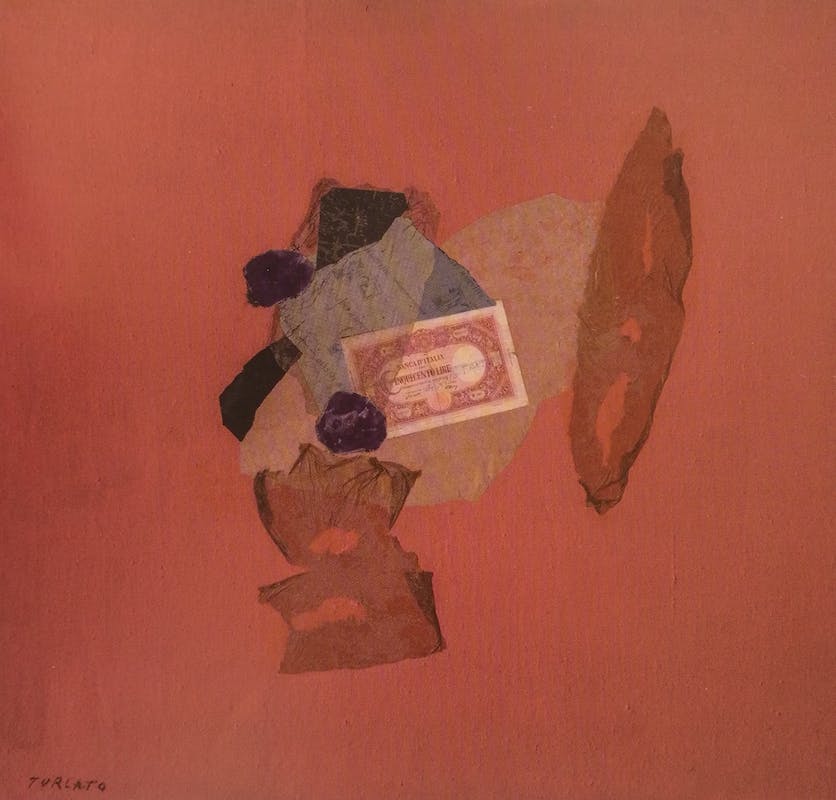 From the second post-war period on, Giulio Turcato became one of the driving forces behind the many groups pushing for a radical renewal of Italian Art, from the Nuova Secessione Artistica Italiana, to Forma 1, to the Fronte Nuovo delle Artiand the Gruppo degli Otto: groups that opened up to welcome international research experiences with a particular focus on non-figurative tendencies.

Turcato exhibited the first version of the subject depicted here, his The sheet of indulgences, at the Biennale di Venezia in 1952, in Lionello Venturi’s group of concrete abstracts. The subject, portrayed again in his oil painting Memory of St Rocco, depicts a specific occurrence: the participation in a religious procession in honour of St Rocco, during which the statue of the saint, carried in the procession, was preceded by a sheet onto which those present would throw coins and banknotes as votive offerings.

Turcato took up the same subject again from about 1957-58, enriching his works by experimenting with different materials and textures. In fact, he combined paint and oil with sand and tar. Iconographic inspiration remains an insignificant part of his work and the artist concentrates instead on making shapes emerge from the background of the monochrome painted surface. In this work he adds tissue paper, cardboard with wording written with a pen and the 500 lire out of circulation bank note, all serving predominantly as pure visual effects. Collage and the techniques based on his studies of the European Informal movement and the Dadaist ideas co-exist in a work which, as Turcato himself states, “does not aim to manipulate the object as the carrier of meaning, but rather as the conveyor of pure aesthetic substance. What interests me most is the possibility of using a visual value to generate emotions”.

With this painting, Turcato won the Carmine Foundation Academic Award for the Fine Arts, amounting to 500,000 lire, during the National Fiorino Award Exhibition in 1963. As envisaged by the Award regulations, the painting became part of the collection of the Gallery of Modern Art in Palazzo Pitti.