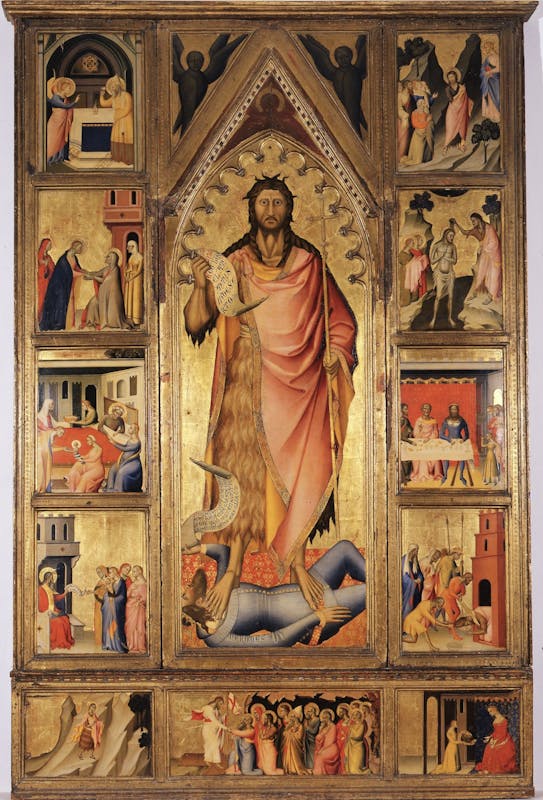 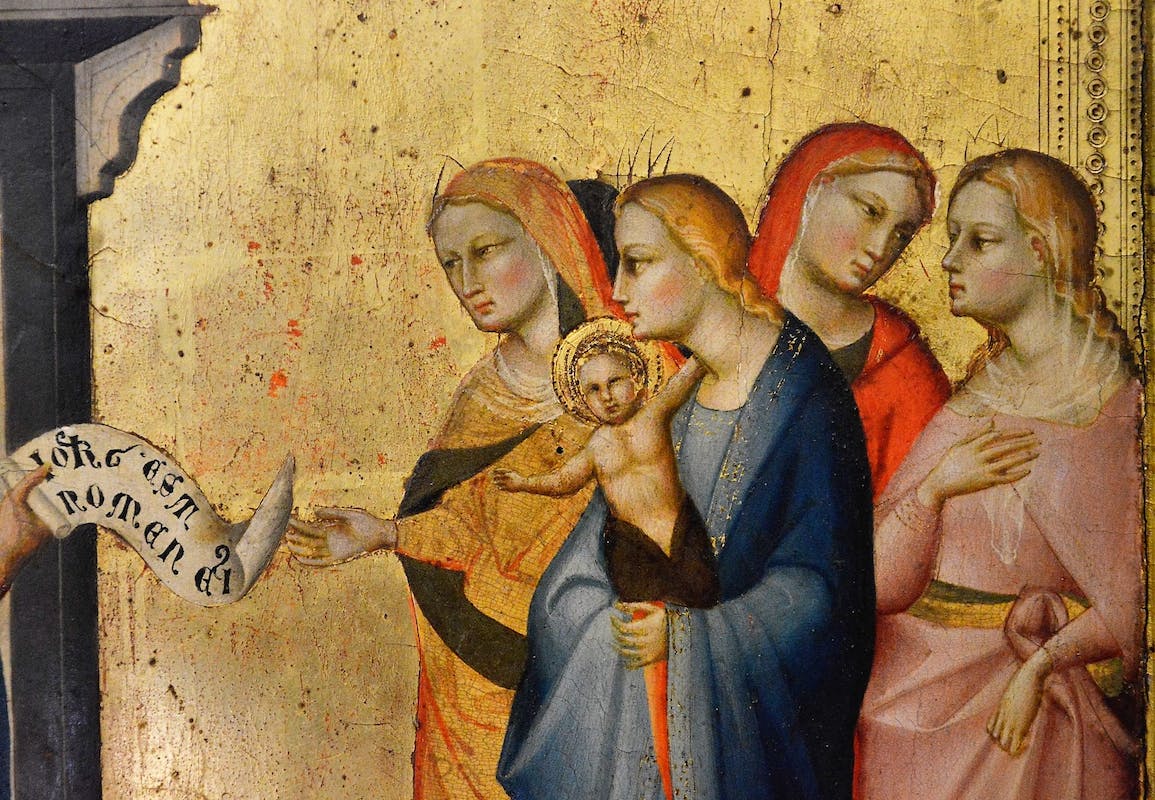 “EGO, VOX CLAMANTIS IN DESERTO” by brush, on the scroll

The prophet John the Baptist is shown triumphant over his murderer, Herod, King of Galilee. The saint has the unkempt appearance of the ascetic, and under his cloak, he is wearing a robe of camel hair and holding a scroll that reads: EGO, VOX. CLAMANTIS IN DESERTO (I am the voice crying in the wilderness, Mt. 3:3). Herod too, identified by the word HERODES on one arm, has a scroll bearing a long inscription: NON INSENSATI VITA ILLORUM EXTIMABAMUS INSANIAM ET FINEM ILLORUM SINE HONORE ECCE QUOMODO COMPUTATI SUNT INTER FILIOS DOMINI ET INTER SANCTOS SORS ILLORUM EST (We foolishly considered their life to be madness and their end to be without honour. Behold, how they are numbered among the children of God, and their lot is among the saints.; Book of Wisdom 5:4-5).

Eleven pictures around the main frame depict scenes from the life of John. On the left is the birth and childhood of the saint, prodigiously conceived by his elderly parents, Elizabeth and Zechariah. The happy event is announced to Zechariah (1) by an angel and after Elizabeth conceives, she receives a visit from Mary (2), future mother of Jesus. After the birth (3), Zechariah, who was made temporarily mute for doubting the angel’s prophecy, writes the name chosen for his son (4): IOHANNES EST NOMEN EIUS (John is his name; Lk 1:63). The sequence ends with John as a child, retreating to pray in the wilderness (5). In the top right, the tale continues with the sermon of John in the desert (6); the baptism of Jesus (7); Salome who, instigated by her mother, Herodias, dances for Herod, asking for the head of John in exchange (8); the saint’s martyrdom (9) and the conclusion, with Salome taking John’s head to her mother (10). At the bottom, in the centre, Christ descends into the underworld to rise again and free the souls of John and the righteous (11).

The composition of this piece, with its effigies of the saint in the centre, surrounded by the stories of his life, is based on a model that was widely used in Tuscany during the 13th century, becoming far less popular by the end of the 14th. Giovanni del Biondo’s aims were to propose a clear narrative, together with an intelligible portrayal of the theological concepts. He was a prolific painter who studied under the influence of brothers Andrea and Nardo di Cione, focusing on settings and on the details of his subjects’ costumes to make it easier to identify the places, characters and their social classes.

The altarpiece comes from the Ginori chapel in the church of San Lorenzo in Florence. It became a part of the Ferrari Corbelli collection in Florence between 1857 and 1864 and was later purchased by Alessandro Contini Bonacossi in 1934.

The altarpiece of St. John the Baptist by Giovanni del Biondo

Video in Italian | On the occasion of 24th June, feast of St. John, patron of Florence