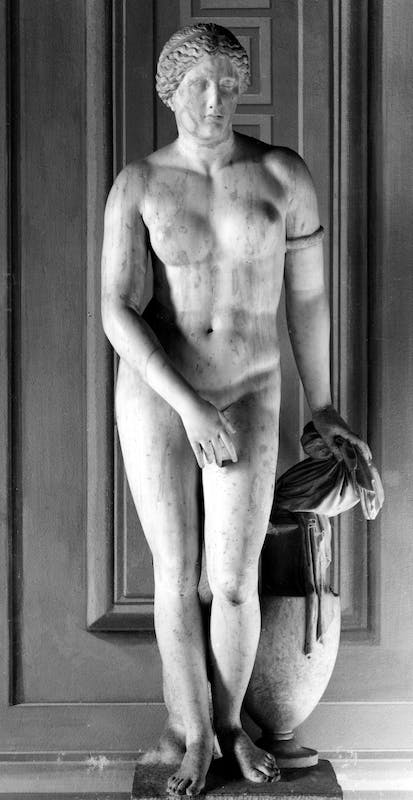 The work shows Aphrodite, goddess of beauty, captured just before or just after taking a bath, while, completely naked, she covers her pubis from the eyes of the onlooker. This depiction of the goddess is known as the “Knidian Aphrodite”, since the original was made by Greek sculptor, Praxiteles, in the central decades of the 4th century B.C., for a sanctuary in Knidos, on the coast of Asia Minor, dedicated to the Aphrodite Euploia, the Aphrodite who “grants good navigation.” The connection between the goddess and water was skilfully developed by the Athenian artist in this image of great sensuality, which met with well-deserved success, as documented in numerous copies in all sizes and considered in the ancient world, in a masterpiece that has never been exceeded in the sculptured arts. “All of her beauty is uncovered; she has no clothing, is naked and only a hand with which to try to cover her shame. The sculptor was so skilled in his art that the stone, so repugnant and hard, seem to be the softest flesh,” wrote Luciano di Samosata about the work in the 2nd century A.D., proof of a lasting, uninterrupted admiration. The Florentine copy, dating back to the 1st century A.D., although showing the iconography of Praxitele’s famous model with a certain verisimilitude, is unable to restore the soft, supple result of the model, which was the main reason why the original was such a success. The work has perhaps been in the niche room of Pitti Palace since as early as 1568. Numerous modern additions - including the left arm and part of the right, the legs below the knees, the bottom part of the legs and lastly, the vase that acts as a support, together with another smaller element - are joined by a reapplication of the head that is not perfectly correct, leading to an angle that is slightly different to the way it must have looked in ancient times.